35 Norwegian women who “improvised, surprised, and came uninvited” to the opening of the Norway Alpine Center in 1989. They swooped from the woods to make their presence known when they had been excluded, skied down the mountain with lanterns and clanging cow bells to crash the ceremony. These “women on the loose” became a fond symbol of strength and vitality in Norway, so much that they were invited to participate in the opening of the 1994 Olympic Games.

Sue Monk Kidd expresses in Dance of the Dissident Daughter that it is essential for a woman to know her own value, speak her own conscience, and act because she relies on and trusts what is within her. When empowered, she faces challenges as a dissident, if necessary, stating: “I am here now, and I am not going away.” That power may surprise her and the world may gasp at the genius displayed in the resulting effectiveness.

Mrs. Kidd also wrote The Secret Life of Bees, a novel of the feminine force, which serves as the catalyst for creating opportunities for empowering women to take their critical place in our world. 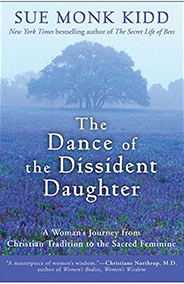